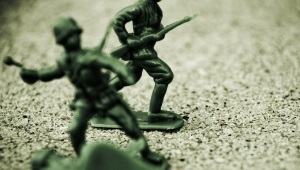 Have you seen or experienced spiritual warfare? Until my family and I began the process of planting a church, I don’t know that I ever had any experience with spiritual warfare outside of battling my own sin, hearing missionaries talk about their battles, and sharing and hearing with other Christians the stories of demonic oppression told to one another like ghost stories around a campfire. And that was the extent to which I understood spiritual warfare – fighting with my own pride or bad attitudes and stories of the creepiest, unexplainable stuff that happened somewhere else in the world. I only understood Spiritual Warfare as something small or something remote.

I say this as a lifelong church member and Bible reader. As a child, I regularly heard stories from missionaries who experienced some crazy things on the front lines of ground breaking gospel work in places filled with dark spirituality. It was good to hear and know that the spiritual world is still real, even after the enlightenment paved the way for naturalism as the de facto worldview of the western world. But that spiritual world was always explained by someone “over there.” Eventually I took this to mean spiritual warfare only happens “over there.” I was also a student of the Bible, so I could explain how we see spiritual warfare taking place in Scripture: through the works of Satan, the influence of the world, and my own sinfulness there was an ever-constant pressure pushing people towards rebellion against God. Boom! That was my definition of spiritual warfare. My neat little categories helped me explain spiritual warfare without ever having to grapple with it. My knowledge from the Bible and my confidence that it doesn’t really happen here (to me) made it simultaneously difficult to recognize and easy to dismiss when I was standing in the dead center of it.

Before I explain what warfare has looked like for my family, I want us to start with Scripture. Look with me at the go to passage for every discussion on spiritual warfare:

10 Finally, be strong in the Lord and in the strength of his might. 11 Put on the whole armor of God, that you may be able to stand against the schemes of the devil. 12 For we do not wrestle against flesh and blood, but against the rulers, against the authorities, against the cosmic powers over this present darkness, against the spiritual forces of evil in the heavenly places. 13 Therefore take up the whole armor of God, that you may be able to withstand in the evil day, and having done all, to stand firm. 14 Stand therefore, having fastened on the belt of truth, andhaving put on the breastplate of righteousness, 15 and, as shoes for your feet, having put on the readiness given by the gospel of peace. 16 In all circumstances take up the shield of faith, with which you can extinguish all the flaming darts of the evil one; 17 and take the helmet of salvation, and the sword of the Spirit, which is the word of God, 18 praying at all times in the Spirit, with all prayer and supplication.

This passage hits on some pretty awesome images. Paul uses the garb of a soldier as an analogy for how we are to prepare for spiritual war. We put on the belt of truth, the breastplate of righteousness, and our shoes of the gospel which carry us into battle to bring peace to the war. I can still picture the various Pictures of Roman soldiers my pastors and Sunday School teachers used to explain the intricacies of how all these things work together to create an unstoppable Christian soldier, marching as to war.

We look at this passage, talk a lot about Roman soldiers, and then we go on about our way, usually with a subtle confidence that the enemies listed in verse 12 occupy the same place as the armor listed in the following verses: the realm of the rhetorical device. I want to alert you, brothers and sisters, the principalities, powers and kingdoms of darkness are very real, very close, and very active.

So with that in mind, let me give you, as an example, we are seeing spiritual warfare in our church and our family.

Relationships: When I first began the process of gathering a team to plant a church, I was dealing with a number of guys who have struggled to be unified with any body for a long period of time. I viewed this as personal sin issues in their hearts (neatly fitting it into a category, thereby dismissing it). Each of them was committed to partner in planting a church and reaching a community, so we kept moving forward together. Over the following months, personal discontent from multiple guys led to backbiting, and major moral failures from a couple of others led to a total meltdown of our burgeoning team. Division reigned, I was burnt out, and the team was gone.

Emotional Health: Over the next two months, I struggled to recover from many of the wounds I had been dealt while trying to help others hold their lives together. I was struggling to find purpose in what I was doing. I began to doubt whether I was equipped for the task of church planting. I had a slow simmering anger and frustration just under the surface of my emotions. And I could not recover. That was new for me. I have always been able to take some pretty heavy blows without losing momentum, but this time, I was down and out.

Physical Health: Starting in November, my family started getting sick. We continued getting sick with various viruses, colds, and stomach bugs. It is the second week of February, and since mid-November, someone in our house has been sick every day. Last week, it was me. Then all three of our boys got sick as well. Currently, our youngest is sick for the second time in the past 10 days, and it looks like our oldest is moving from a cold to an ear infection for the second time in a month. Three months of various sicknesses.

Also, one of our current core team members helping us plant a church, has told us they have experienced more sickness in the last three months than they have in the previous few years combined. More sickness.

Marriage: On a personal front, Ali and I have had an unusual experience as well. We rarely fight. This is not because we have some fairy tale relationship. It is really because we are good friends who like the same stuff, are committed to the same goals, and just rarely end up on opposite sides of an issue. So it has been odd that in the last 6 weeks, we have had three issues pop up where we have to struggle to get on the same page, and each of those issues popped up the day we had a date planned. Our date nights were great, but it took a lot more work to get on the same page beforehand.

I am about as rational and down to earth in my thinking as you can be. I love logic, which means I expect visible points of connection between causes and events. Therefore, I struggled for a long time to come to the place where I recognized there could be more than simple relational division, personal wounds, common sickness, and bad timing. The sum of these issues amounts to a constant battle to remain focused on sharing the gospel, building relationships, and enjoying God.

While I don’t understand how this stuff works out economically in the spiritual realm, I am confident that we, as we work towards reaching people with the gospel and planting a church, are encountering more opposition than I had ever imagined before we walked through it.

So now, we pray directly towards God’s protection over our health, our marriage, and our friendships. We pray directly towards Christ’s righteousness covering our hearts, instead of our self righteous pride. We pray, asking for a sustaining faith in the times of difficulty. We pray seriously about some serious spiritual warfare. Because it is big, complex, and really close to home.

4 thoughts on “Spiritual Warfare: My life as case study”