Leave a comment
By Whitney Clayton Books, Death By Living, Thinking It Through

Thinking It Through: Death by Living, Chapter 1 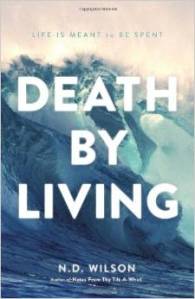 In this series of Thinking It Through, we will be thinking through the book Death By Living, by N.D. Wilson. This series is meant to share what has shaped me and influence your future shape as well.

One Sentence Theme of Chapter 1: Life is a story, but the story is bigger than you think, which makes God both bigger and smaller than you’d expect.

Explanation: One of Wilson’s most consistent themes throughout Death By Living is reading your story in context with the stories which led to your story. Wilson traces this theme through the narratives of his grandparents and the crucial points at which various people and events radically altered their fate (and his, by extension). In the opening chapter, it seems Wilson’s aims to shake the dust off of Story, our banner-worthy buzzword, and examine it with fresh eyes.

“Story, story, my life is a story,” says the hipster to his Twitter feed.

Right. Narrative. Story. Boy, it sounds nice and groovy, but it’s coming from someone who barely has enough of an attention span to get through a Web clip of over four minutes, and may the postmodern gods show their mercy if the atmospheric WiFi wanes or his little browser starts buffering.

Wilson goes on to explain that we treat this truth with far too little respect. We are part of a story, and the author put us there for a reason. But many of us are too busy talking about story as a concept to take the time to read our own, “let alone live it with any kind of humble self-awareness.”

He goes on to explain two extremes people usually fall into at this point:

One the one hand, people assume that God is diffident and distant, with all the personality of the Great Gray Yawn in the Sky. On the other, people act like God is their personal gnome of narrative interpretation.

Wilson explains a God both bigger than we could imagine, and smaller than we would believe. In his words “Infinite goes all the way up and all the way down.” This means every person counts as one infinitesimally small part of the grandest of all grand schemes, but it also means the smallest character in the great play called life gets the full weight of their author’s attention.  Wilson says it well when he says,

[We] are both tiny and massive. We are nothing more than molded clay given breath, but we are nothing less than divine self-portraits, huffing and puffing along mountain ranges of epic narrative arcs prepared for us by the Infinite Word. Swell with pride and gratitude, for you are tiny and given much.

So in the end, God’s smallness, expressed in his attention to you, makes us great, while his greatness, expressed in the magnitude of the story he weaves before and behind you, make you small. Therefore, learn your story and play your part well.

Clear your throat and open your eyes. You are on stage. The lights are on. It’s only natural if you’re sweating, because this isn’t make believe. This is theater for keeps. Yes, it is a massive stage, and there are millions of others on stage with you. Yes, you can try to shake the fright by blending in. But it won’t work. You have the creator God’s full attention, as much attention as He ever gave Napoleon. Or Churchill. Or even Moses. . . You are spoken. You are seen. It is your turn to participate in creation.